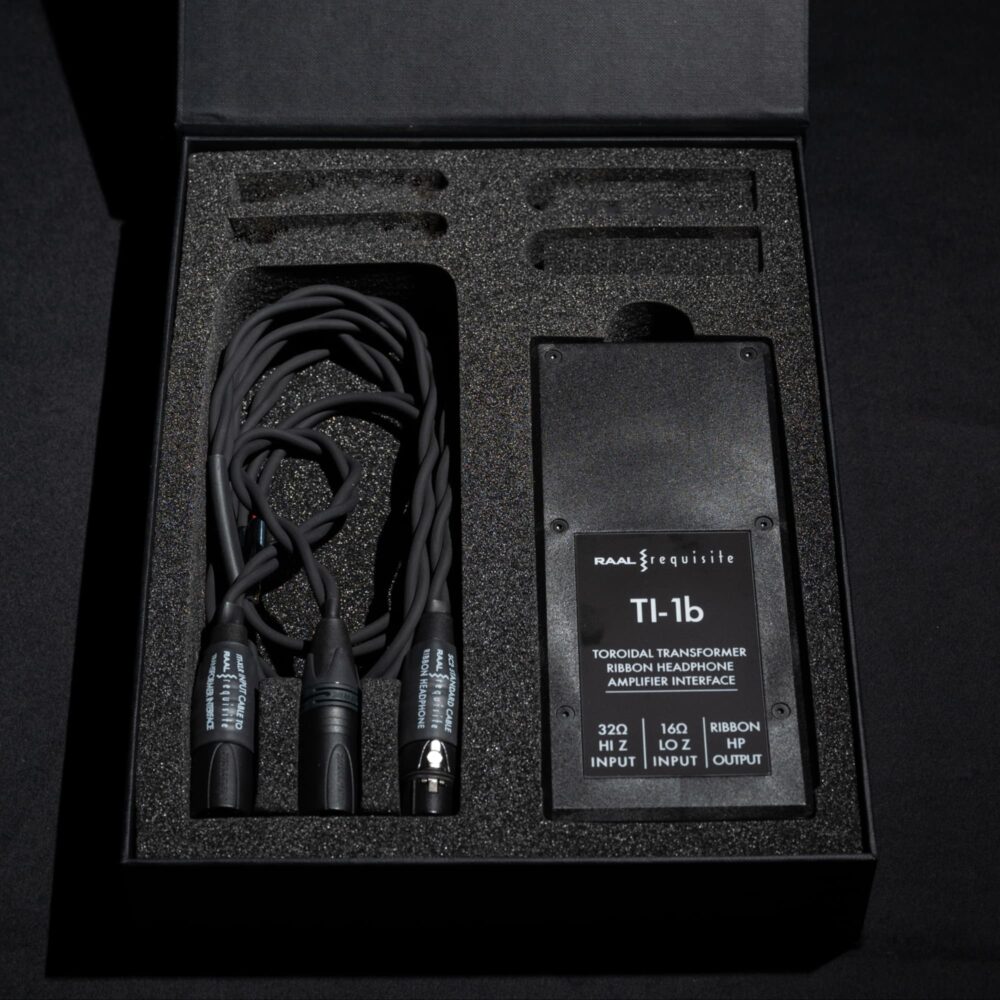 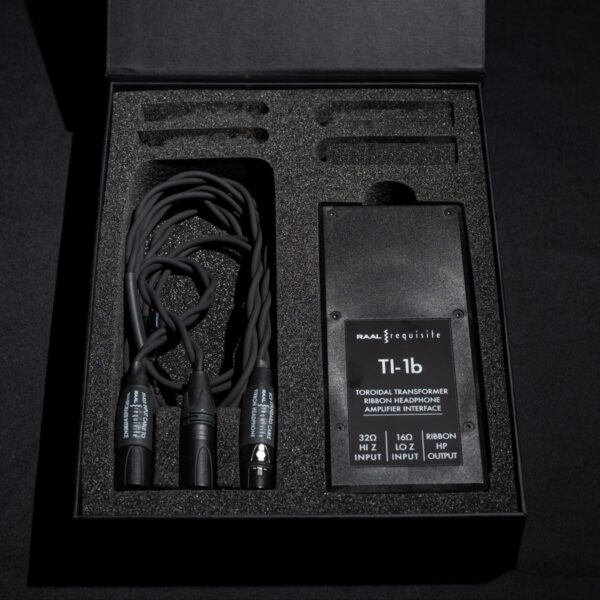 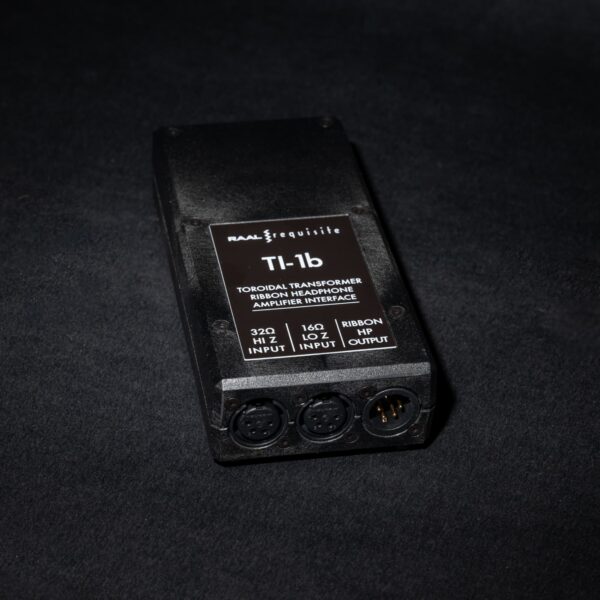 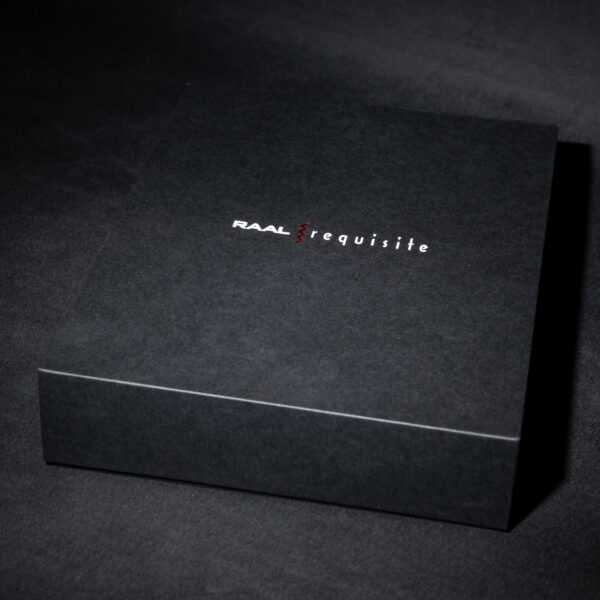 Talk with an Expert, or email us

Drive Your True-Ribbon Headphones
With Conventional Headphone Amps having as little as 2-Watts!

Until now, devotees of True-Ribbon listening have had a limited range of options for driving the super low-impedance & high-current demands of their much loved True-Ribbon headphones.

The TI-1b provides access to a vast number of conventional headphone amplifiers for powering True-Ribbon headphones with as little as 2-Watts and depending on the amp and required volume, as little as 0.5-Watts of power.

In addition to headphone amps, the TI-1b bridges the gap to include the use of conventional, high-powered, 2-channel amps and mono-blocks.

A quantum leap? Yes! But let’s rewind for a moment…

True-Ribbon headphones are of very low resistance (impedance)_few tens of milliohms. About 10 times less than a headphone cable. They require very low voltage and high current. A headphone amp is incapable of driving them because the ribbon + cable impedance is far lower than 32 Ohms and a conventional headphone amp will not produce the 4-5 Amps of current required.

Originally, we developed a reliable solution requiring a 100W speaker amp with a network of resistors (in series) to the True-Ribbon headphone and thus, loading the amp with 6 Ohms. That method allows the amp to work in its normal load range and comfortably produce the necessary current True-Ribbons require.

Transformers will convert AC signal of high-voltage/low-current into low-voltage/high-current, thusly, turning a high impedance into a low impedance (or vice versa) allowing for matching of mismatched sources and loads. This is a transformers typical duty in ribbon tweeters and tube amps, both of which we have tons of experience in designing and building

So then, what’s the Big Deal?

Tweeters, however, have their transformers mounted very close to the ribbon itself so there is no significant loss due to wire length. Using that same method with headphones, you’d be wearing 2 lbs. of transformers on your head and visiting your chiropractor on a regular basis. Simply stated, not a practical solution!

With tube amplifier output transformers, the speaker is far away, but the cable has a far lower resistance than the speaker, so again, no significant loss there. But, by that same logic, the headphone cable would have to weigh 2 lbs.

With True-Ribbon headphones, the situation is completely backwards!
Until the TI-1b, we could find no known example or solution in audio.

There were no such examples of this upside down situation.
So, we’ve had to develop our own solution…
And… it had to work flawlessly.

With headphones, a lightweight and very flexible cable is needed. This means a low cross section of the conductors, and in turn, that the cable functions as the dominant resistance/impedance in our headphone cable/ribbon driver circuit.

The cable mostly loads the impedance matching transformer, not the ribbon. In such low impedance circuits, the cable must not have excessive inductance, or the highs will drop, far too soon. Also, it must have a certain resistance per unit of length such that when we load the transformer at the secondary with that cable, we get the desired 32 or 16 Ohms at the primary. Our development brought us to the new SC2 (6ft) Standard Cable, included with the TI-1b.

The transformers themselves must have very low leakage inductance, or again, in these very low impedance circuits, the highs will be dropping too early. They must also have low capacitance, to prevent ringing in the ultrasonic range. This may potentially pose a serious problem for amplifiers and we have found that the best way to solve that is using toroidal transformers with windings made in a particular way… plus, a few additional components. These added parts won’t affect the sound, they just ensure that there are no reactive loads to create overvoltage peaks that may damage the amplifier.

The development took a while longer than we hoped for, but in the end, we now have a transformer based, amp to ribbon, interface with 32 and 16 Ohm inputs, with less than -100dB distortion, that can transfer 6 Watts of power, exhibits no ringing, goes far into the ultrasonic, is safe to plug-in and out of a fully cranked amp, safe to drive with headphones unplugged and grounds the static electricity of the headphones. Simply put… pure and safe transformation of any level in sound refinement of your headphone amp, into a high current, ribbon driving monster at the other end of the TI-1b!

With the TI-1b, you can also use normal speaker amplifiers, in a vast range of power. From SET’s with a few Watts to whatever 100 lbs. of solid-state you have. The good thing about loading large power amps with 32 Ohms is that they will rarely leave Class A operation, even if they are Class B with forward bias, as the bias current alone is almost all the current you will need to swing lots of SPL at the headphones, so you can expect significant improvements in sound refinement of your speaker amp, with considerably less “crossover“ distortion artifacts.

Our general recommendation is a conventional headphone amp having from 2 to 6 Watts at 32 Ohms, but we’ve been pleasantly surprised with amps as low as 0.5 Watts when the sound is right. Of course, if your listening requires high dynamic range or you like it loud, choose something closer to 6 Watts than 2 Watts.

The TI-1b comes with everything you need to complete your liberation:

For a 100% refund minus the cost of shipping:

1. Customer must contact us within 14-days of the shipping/pick-up date.
2. Customer must provide us with a tracking number from their shipping company within the next 10-days.
3. Upon receiving the unit, Requisite Audio will inspect the unit.
4. If the unit is determined to be in like-new condition, the customer will receive a 100% refund. Customers will not be reimbursed for the cost of shipping.

No returns will be accepted after 14 days under our refund policy.
RAAL-requisite reserves the exclusive right to determine if a unit is in like-new condition and the right to determine the final refund amount.
Customers who need assistance with a manufacturing defective product should see our Warranty Policy.

RAAL-requisite warrants its products to be free from defects in material and workmanship under normal use and service for a period of five (5) years from the date of delivery. This warranty is only made to the original purchaser and is not transferable.

In the event of failure of a product under this warranty, RAAL-requisite will repair, at no charge, the product returned to its factory. RAAL-requisite may, at its option, replace the product in lieu of repair. If the failure has been caused by misuse, neglect, accident or abnormal operating conditions, repairs will be billed at the normal shop rate. In such cases, an estimate will be submitted before work is started, if requested by the customer.

ALL OTHER WARRANTIES ARE HEREBY DISCLAIMED.

This warranty does not cover:
1. normal wear and tear or normal aging of the product;
2. cosmetic damage, including but not limited to scratches and dents;
3. damage through accident, abuse, neglect, misuse, natural events, or other external causes;
4. damage through misapplication, overloading, or improper useage;
5. damage due to improper maintenance and repair;
6. damage as a result from the shipping and handling by third parties; or
7. product alterations.

EXCEPT AS PROVIDED IN THIS WARRANTY AND TO THE MAXIMUM EXTENT PERMITTED BY LAW, RAAL-rEQUISITE IS NOT RESPONSIBLE FOR ANY DIRECT, INCIDENTAL OR CONSEQUENTIAL DAMAGES OR INJURIES RESULTING FROM ANY BREACH OF WARRANTY OR CONDITION, INCLUDING BUT NOT LIMITED TO LOSS OF USE; LOSS OF REVENUE; LOSS OF ACTUAL OR ANTICIPATED PROFITS; LOSS OF BUSINESS; LOSS OF OPPORTUNITY; LOSS OF GOODWILL; LOSS OF REPUTATION; OR ANY DIRECT OR INDIRECT OR CONSEQUENTIAL LOSS OR DAMAGE WHATSOEVER CAUSED INCLUDING THE REPLACEMENT OF EQUIPMENT AND PROPERTY.

Customers may be required to provide proof of purchase date, respond to questions designed to assist with diagnosing potential issues and follow RAAL-requisite’s directions to make a claim on your warranty.

*DO NOT OPEN THE PRODUCT. OPENING THE PRODUCT MAY VOID YOUR WARRANTY. To make a warranty claim:

RAAL-REQUISITE SHALL HAVE THE EXCLUSIVE RIGHT TO DETERMINE IF A UNIT IS COVERED UNDER ITS WARRANTY POLICY. Severability:

The invalidity, illegality or unenforceability of any provision of this warranty shall not render the other provisions invalid, illegal or unenforceable.

This warranty shall be governed by the laws of the State of California. The courts of California shall have the exclusive right to adjudicate any disputes arising under or in connection to this warranty.